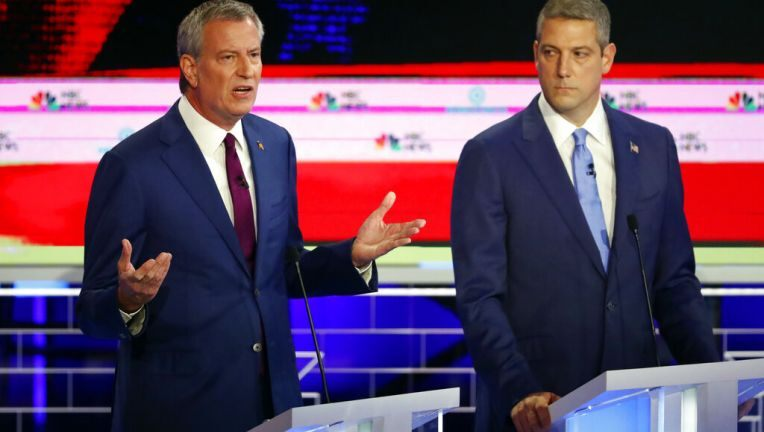 The unapologetically progressive de Blasio was coincidentally standing on the left of the debate stage in the row of the first 10 Democratic candidates to bid for a 2020 White House win.

In one particular question regarding gun violence, De Blasio stated,  “For the last 21 years, I have been raising a black son in America. I have had to have very, very serious talks with my son, Dante, about how to protect himself on the streets of our city and all over our country, including how to deal with the fact that he has to take special caution because there have been too many tragedies between our young men and our police.”

The Police Benevolent Association of the City of New York (PBA) blasted the mayor for his comment about talking to his African American son and police-community relations.

PBA President Patrick Lynch tweeted a statement which read, “Mayor de Blasio has apparently learned nothing over the past six years about the extremely damaging impact of anti-police rhetoric on both cops and the communities we serve.”

The PBA is the largest labor union representing police officers of the New York City Police Department. It represents about 24,000 of the department’s 36,000 officers.

Lynch has frequently accused de Blasio of making anti-police statements, leading some police officers to turn their backs on the mayor during an officer’s funeral after two police officers were murdered in 2014.

The police union disagrees with de Blasio’s bid for the 2020 presidency, saying in May, “While the mayor of our nation’s largest city is busy running around Iowa and getting upstaged by the mayor of South Bend, Indiana, there are real problems here at home.”

The poll also found that 76 percent of New York City voters did not think de Blasio should run for president, with “every listed party, gender, racial, borough and age group” agreeing he should not attempt a run for the White House.