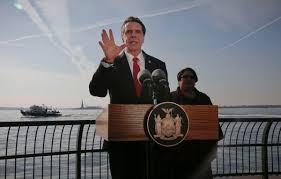 Ellis Island, NY – Governor Cuomo (D-) began 2019 and his third term with an inaugural address on Ellis Island in which he stated that within the first 100 days of his new term, he will propose “the most progressive agenda this state has ever seen, period.”

Cuomo says, “America’s only threat is from within,” and listed legalizing recreational marijuana, codifying abortion rights and fixing New York City’s subways as priorities for 2019.

“We will make history and New York will move forward, not by building a wall, my friends, but buy building new bridges,” he said, making reference to President Donald J. Trump’s campaign promise and highly charged political fight to build a border wall along the U.S. – Mexican border.

With the partial government shutdown entering day 12 and hinging entirely on funding for a U.S. southern border wall, there seems to be no truce in sight between the Republican and Democratic parties, with President Trump stating he will keep the partial shut down “for as long as it takes.” President Trump insists a southern border wall is necessary for homeland security and to curtail drug and sex trafficking onto U.S. soil.

But Gov. Cuomo said some of the nation’s leaders have demonized diversity to “make our differences our greatest weakness instead of our greatest strength.”

Ellis Island was once the nation’s busiest immigration gateway to the U.S., welcoming millions of immigrants from around the world. Cuomo called the island “an enduring symbol” of America’s core values of hope and opportunity.

The battle over legal vs. illegal immigration continues to rage nationwide, with President Trump insisting on abolishing ‘Catch & Release’ programs and enforcing standing immigration laws at proper ports of entry, while Democrats are in favor of an open border immigration policy.